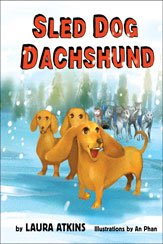 Dog lovers of every size will root for Jasper in the sled race!

When Jasper the dachshund hears about the world’s biggest dog sled race in Alaska, he just knows he can win. And when his family goes to watch the race, he decides to enter. Jasper tries every position, but he’s too little and doesn’t fit into the sled’s harness. That doesn’t stop him. Jasper sneaks aboard a team sled and finds a way to become a part of the team. His yappy enthusiasm keeps them moving, and Jasper learns how much energy it takes to pull the sled. In the final stretch of the race, his team is neck-and-neck with another sled. Can Jasper help lead his team to victory? Will they win by a (long, pointy) nose?

“Illustrated with vibrant scenes depicting the snowy action, this title is sure to inspire little ones with the idea that sometimes enthusiasm and courage can be as important as size. . . . VERDICT Perfect for one-on-one shares or as a winning storytime offering that will hold listeners’ attention until the last page.”
—Mary Jennings, Camano Island Library, WA, School Library Journal

“This is a perfect bedtime story for kids, ages 5 to 7. . . . This puny little guy with a strong bark, good intentions, and a big heart won’t stand down and does his part to inspire the team to greatness in the world’s biggest sled race.”
—Judith M. Gallman, Editor, BayWoof, the free monthly newspaper for San Francisco Bay Area dog lovers

10 Unique Gifts for Dachshunds and Dachshund Lovers! “The illustrations are great and both share valuable life lessons.. . .the Sled Dog Dachshund book about a pup from Alaska that doesn’t let others discourage him. . . .”
—Jessica Rhae Williams, YouDidWhatWithYourWiener.com

“Sled Dog Dachshund is an exciting, brilliantly illustrated story about a heroic little dachshund named Jasper. Jasper, who lived up in Willow, Alaska, decided he wanted to be part of a sled dog team to help win a dog sled race.

“Despite his father’s and his brother's doubts and discouraging comments that he was not big enough or strong enough to be a sled dog, he persisted with his dream. Every page of Sled Dog Dachshund comes alive with action packed, snow-filled excitement and drama. Jasper met a team of huskies at the race and tried to sign up. Then Jasper found he had to be part of a sled dog team to compete. Some helpful huskies introduced him to the roles of lead dog, team dog, and wheel dog, but Jasper was not big enough or strong enough to fill these demanding sled dog roles. The huskies laughed good-naturedly at Jasper trying to fit into their harnesses and pull the heavy sled.

“However, Jasper was determined to be in the race, so at the start of the race he jumped on the sled and rode along with his favored sled team through the cold, fast paced hours of the race at its beginning. The rest of the story is filled with excitement, innovation, courage, and effort, as Jasper worked again and again to find ways to help encourage his powerful sled dog team. In fact, Jasper became the team's best fan and cheerleader, barking them through the tough times, the tired times, and the times when the team was close to giving up.

“Sled Dog Dachshund is a magnificent, inspiring read for children ages 3-8. Identification with the underdog can lead to unforeseen outcomes, for a dog or for a person. Children and adults will love the story and messages of Sled Dog Dachshund.”
—James Cox, Editor-in-Chief, The Midwest Book Review

“I recently read Sled Dog Dachshund by Laura Atkins, suggested for ages 5–7, and I was shocked. Shocked by how much I loved it and how emotional I got at the end. My eyes felt like they could gush with happy tears. . . . This book is packed with absolutely adorable imagery and the sweetest message. . . . It’s all about team work and perseverance. I don’t want to give anything away, but I will say that kids and adults will fall in love with this little Dachshund.”
—Gabrielle Segal, Editorial and Social Media Manager, The Reading Room

“Sled Dog Dachshund shows how every member of the team plays an important part in a successful outcome. The delightful illustrations capture the strength of the huskies with the determination of the dachshund. This is an important life lesson for children to understand.”
—Elizabeth O’Brien, Children’s Literature Specialist, New York City Department of Education

“Jasper dreams of being a winning sled dog, however, he quickly realizes that while his heart is as big, if not bigger than that of a Husky, his little dachshund legs and baguette sized body stand in the way of achieving this victory. What’s a dachshund to do?

“Sled Dog Dachshund is an incredibly inspirational story motivating readers to not only acknowledge one’s differences, but to embrace them. Jasper's infectious over-the-top can-do attitude provides the positive reinforcement the team needs to power through the difficult times and as a team, secure the win.

“This is a wonderful children’s book with unique illustrations that capture the canine essence, both with the big sled dogs and the improbable dachshund. The story is a great insight on teamwork that children can benefit from. It also captures the true dachshund spirit and tenacity. Dachshunds perceive themselves as big dogs, but in a little dog body. They won't back down from challenges. Again, this story is a good life lesson for children. Superb little book!”
—Lynne Dahlen, Editor, Dachshund Club of America newsletter

“A wonderful read and very inspiring. The message of teamwork is one that all kids as well as adults need to learn.

“I liked Jasper’s spunk – very typical of a dachshund. That dachshund ‘can-do’ spirit rings very true. I know that Waldo, my dachsie, does not rest until he has finished a task—whether it be making a cozy nest or digging a hole under a fence.

“The illustrations are beautiful, very classic, and heartwarming. Plus they capture the dynamic thrust of the story.

“I can highly recommend it to all but particularly dachsie lovers.”
—Adrian Milton, Dachshund Friendship Club, New York City

Laura Atkins is an author, teacher, and independent children’s book editor with twenty years of editorial experience. Sled Dog Dachshund is her first published children’s book. Laura has worked with various publishers, helping to produce winners of the Coretta Scott King Award, the American Library Association Notable Book selections, and more. She holds an MA in Children’s Literature from the National Centre for Research in Children’s Literature (NCRCL) at Roehampton University in London and an MFA in Writing for Children and Young Adults from Vermont College of Fine Arts. Laura lives in Berkeley, California.

What was your inspiration for Sled Dog Dachshund?

Minted Prose had an idea for a story about a dachshund who is sure he can run in a sled race. I worked with the concept, did my own research about sled races, and developed Jasper as a character. I also watched a documentary about the sled racing in Alaska and read websites, learning about what a grueling race it can be. As I wrote, it became clearer to me that Jasper was going to learn about the joys of being part of a team, and his indomitable spirit would help them all to win.

You’ve edited dozens of books, many of them award winners. How did that experience influence your own picture book debut?

Editing picture books helped me to have a strong sense of the form of the picture book. I knew about breaking the scenes down, almost as if watching a play. Examples would be using the page turns for dramatic effect, and having really fun scenes to illustrate. The humorous content of the book made that easier as well. There’s so much visual humor in the idea of a little dachshund being sure that he could race alongside the big dogs. But it was still definitely a learning experience. Editing and writing are very different. I appreciated the difficulty of creating a strong story, and about being on the other side of the editorial desk! I think it’s helped me to be a better editor as well as a better writer.

Sled Dog Dachshund features the world’s biggest sled dog race. What sort of research was involved in your writing?

I read around, watched documentaries, and researched the logistics of the sled team and different positions. I thought about how much to have the book be based on facts, and how much to just have it be fun and playful. Lots of research went on behind the scenes. We thought about creating dog-friendly facts at the end. Imagine paw prints instead of bullet points. But it felt like the book wanted to be more fun and less educational. So kids who get caught up in the racing side of things can go off and dive in further.

If you could pick one thing, what would you like readers to take away from this story?

Mostly I want the readers to have fun reading and sharing the story with the person reading it to them. But there are some other underlying themes, like, while it can be fun to do things on your own, being part of a team can be great. That winning isn’t the most important thing, though it’s nice too. And I figure dog-loving kids will just have fun spending time in this all-dog world. Sorry, that wasn’t one thing!

How do you feel this story is enhanced by the fact that the main characters are animals?

An interesting question. Originally this wasn’t an all-dog world, and at first I really resisted the idea of changing it. But I came to understand how this made things simpler, and kept the focus on the main story. It was tricky to have humans and dogs, with dogs speaking to each other but not to the humans. This all-dog world helped the story to be more fun and focused.

Author’s choice: Is there anything else you’d like to share with readers about the writing of Sled Dog Dachshund?

I have always liked dogs, and grown up with dogs in my life. But haven’t been a dog owner myself. Since writing Sled Dog Dachshund my daughter and I have adopted a dog, which has totally changed our lives. At first I would have said turned it upside down! But I’m falling in love with Milly, and she’s brought a lot of fun and silliness into our lives. So I now have an even deeper appreciation for the world of dog people. It’s great to have a book that connects to the love—if retroactively. 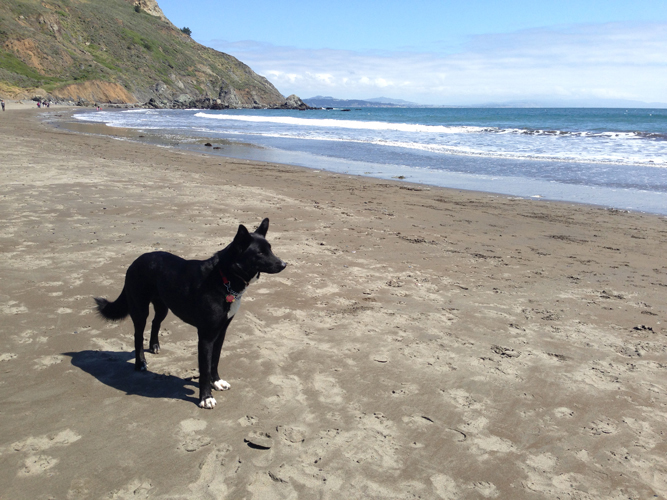 Milly by the sea

An Phan has spent his life in art. He creates advertising illustrations and concept art for many computer games from massively multiplayer online games to casual mobile titles.

His art complements an active live of travel, as he explores new locations to further inspire his creativity.

An studied art at Arena Multimedia in Ho Chi Minh City, Vietnam, where he lives with his family. 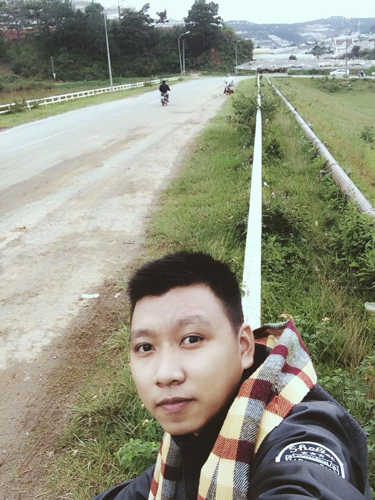